You are a big fool – Praye Tietia replies presenter Mic 2

There have been numerous solidarity messages to actress, Selly Galley over the distasteful manner at which a social media user labelled her as ‘barren’.

READ ALSO: “So has she accepted that she is a barren?” – Miketwo to Selly Galley After She Was Disrespected By The Lady Who Called Her ‘Barren’

This notwithstanding, divergent opinions have also been shared by Ghanaians scrutinizing whether Selly Galley’s ‘curse’ to the social media user was right or wrong.

Even though there has been an outright condemnation, there was a public uproar and high level of anger displayed by most celebrities over the said lady’s comment.

READ ALSO: Sarkodie Went To Get Me Arrested After Waiting 6 Hours To Show him Love – Stonebwoy (WATCH VIDEO)

Seeing the gravity of pain and anger caused by the comment she made, the said lady has publicly reached out to Ghanaians by rendering an unqualified apology to Selly Galley and her husband Praye Tiatia.

As sighted by sammykaymedia.com, Adom Fm’s presenter, Mic Two has waded into the post made by Selly.

READ ALSO: Shatta Wale will lose if he tries to venture into politics; not even as an Assemblyman – CEO of Kri8 Music

According to him, celebrities should have the stomach to contain ‘trash’ and quizzed whether the bubbly actress has accepted the description of her being ‘barren’ and continued by asserting that celebrities who don’t want to be disrespected or insulted should leave social media.

The post made by the radio presenter angered the husband of the actress, Praye Tietia who has sent out a message to Mike Two.

He wrote that the presenter is a “big fool”. 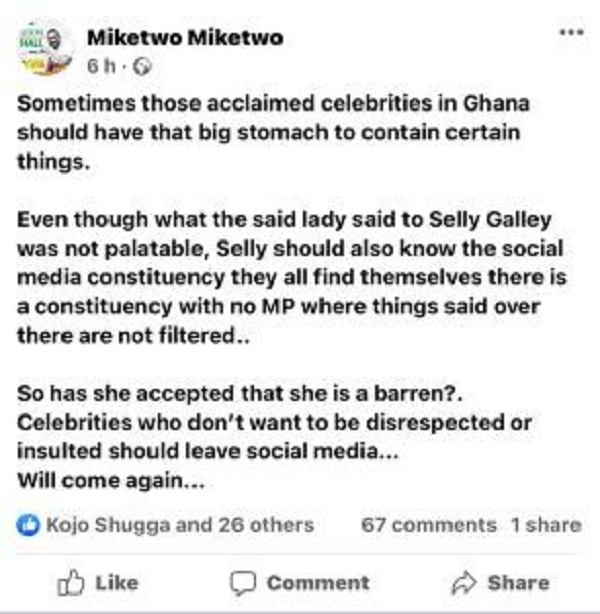